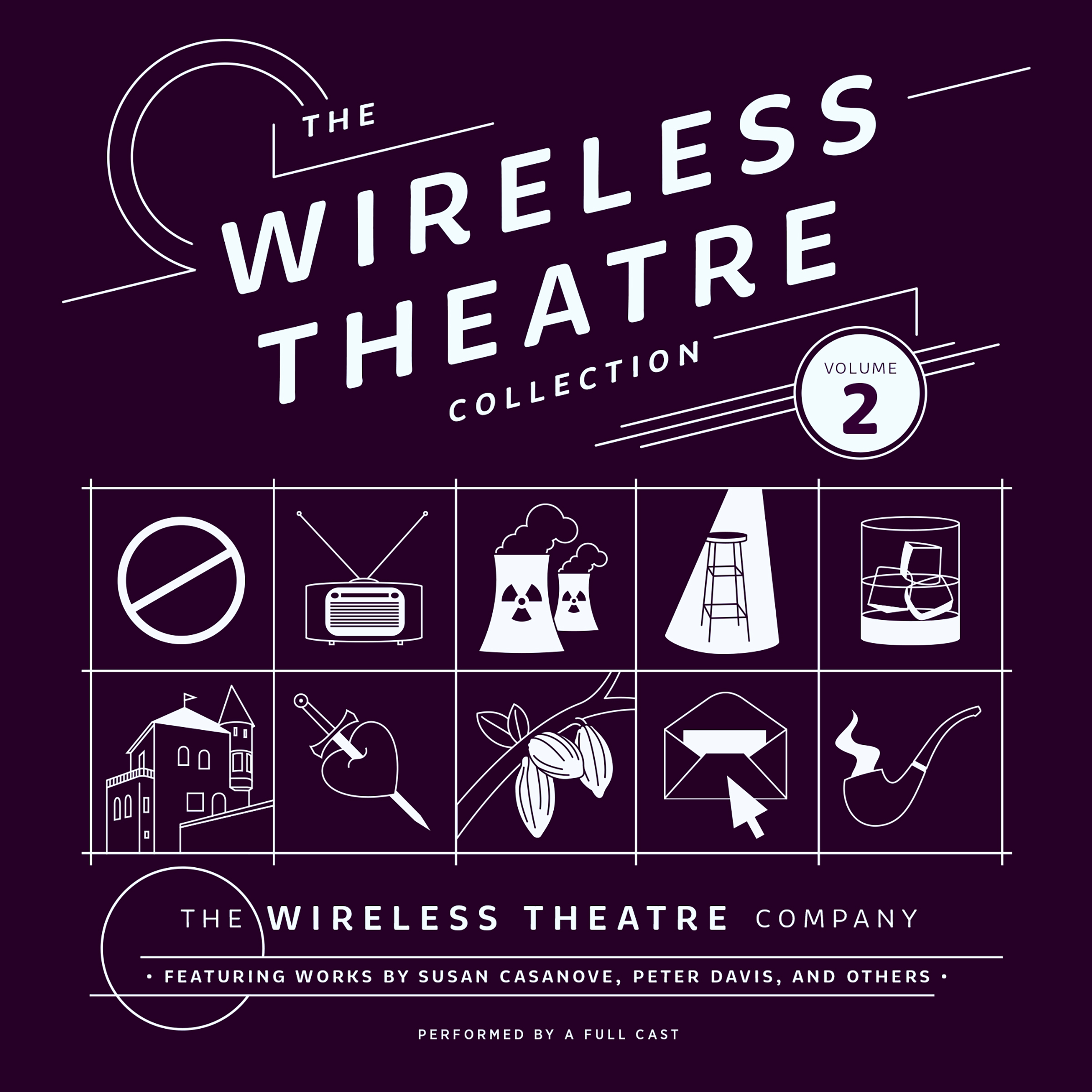 The award-winning and critically acclaimed Wireless Theatre Company strives to keep Radio Theatre alive and well. From the hilarious to the terrifying, this diverse collection features 10 Wireless Theatre productions in a single volume. Their talented team of actors, directors, and writers hail from some of England’s most prestigious theatrical institutions, including the Royal Academy of Dramatic Art, the London Academy of Music and Dramatic Art, the East 15 Acting School, and London’s West End theater district.

WE ARE THE BBC by Susan Casanove, directed by Jack Bowman
Rob Sterling Davies is on the crest of a wave – a celebrated scriptwriter, actor, television personality, the new doyen of Just a Minute, and apparently, Stephen Fry’s new best friend. But all isn’t quite as it seems, and when Stephen discovers that Rob’s BAFTA-winning script was stolen, he undertakes to expose Rob for the fraud he is. We Are the BBC is the follow-up to the hugely popular 2011 hit We Are Not the BBC, and features Nicholas Parsons and Stephen Fry as themselves.

WE ARE NOT THE BBC by Susan Casanove, directed by Jack Bowman
A light-hearted look at the radio drama production process, as seen by the members of an amateur dramatics society in a sleepy suburb of Swansea. It can’t be difficult to make your own play for radio, can’t it? And with a LAMDA-trained professional actor at the helm, surely nothing could go wrong? After their attempt at Mike Leigh – inspired improvisation doesn’t exactly produce satisfactory results, things start to look up when a visiting celebrity agrees to step in and play the lead role.

NO CAUSE FOR ALARM by Gareth Rubin
No Cause for Alarm is a silly play. It has no comment to make about the human condition, love in the 21st century, or the Iraq war.

STAGE FRIGHT by Lynn Howes, directed by Emma Taylor
A savagely funny satire on celebrity and theater that garnered five-star reviews at its world premiere, Stage Fright charts the struggle for supremacy between three actors appearing in a play together: old friends Peter and Charles, and Geraldine, the young and vulnerable actress they have befriended. As opening night approaches, it becomes apparent that Geraldine is not who she appears to be, and the friends must fight to salvage their pride, their identity, and their reputations in this thought-provoking tragicomedy.

THE MIGHTY CARLINS by Collin Doyle, directed by Paul Blinkhorn
On the anniversary of his wife’s death, Leo Carlin and his two sons come together for their traditional night of sharing the good and not so good memories of the dearly departed Mrs. Carlin. Beers are drunk. Plans are hatched. Secrets are revealed. The Mighty Carlins is a black comedy that celebrates a family at its worst.

BLOOD AND STONE by Marty Ross, directed by Mariele Runacre Temple
Based on the true story of Countess Elizabeth Bathory, perhaps one of the greatest mass murderers of all time, a woman who tortured and killed over 600 young women for their blood. Too noble to be executed, in 1610 the “Bloody Lady of Cachtice” was bricked up in a set of rooms in her own castle in Slovakia. Why then should the young and beautiful Katya be at the castle door attracting the close attention of the gaoler and wanting a job looking after the countess? Is it revenge, or some more ghostly visit from Bathory’s past? And if she should help her escape.

THE ST. VALENTINE’S DAY MURDER written and directed by Peter Davis
It’s Valentine’s Day, but events turn less than romantic when one of the members of a dating site is murdered. Can detective Jean-Pierre LePoulet find the killer? Recorded in front of an audience at the New Diorama Theatre, the show received rave reviews.

LAYING GHOSTS by Clare Reddaway, directed by Emily Wright
When Connie’s beloved husband Jack dies after twenty-seven years of marriage, Connie hopes that her only son, Gary, will console her. Gary, however, finds that level of commitment a bit, well, too much of a commitment. Connie is left with interfering neighbor Val until Gary’s girlfriend Sandra rings with some unexpected news. This sets Connie on a journey from a village in the Midlands to Hackney and eventually to Ghana as she finds a way to come to terms with her grief and to forge new friendships and a new life.

EMAILS FROM ABROAD by Julia Messenger and Shirley Mawer
A play based on travels abroad relayed by emails between the ingenuous first-time traveler and her disillusioned home-bound sister.

THE TRIAL OF SHERLOCK HOLMES by Peter Davis and Matthew Woodcock
Sherlock Holmes, the world’s greatest consulting detective, is on trial for his life! Trapped in a nightmarish court room and charged with endangering the public and his friends, Holmes is forced to relive some of his most bizarre cases with only Doctor Watson to aid his defense. Gasp at the “Adventure of the Lizard’s Hands”! Work your brain into a frenzy of confusion as our heroes uncover the mystery of a dead man found in the middle of Regent Street! Steady your nerves as you bear witness to some snakes! On a train! But is all this evidence enough to satisfy a mysterious judge with a vendetta against our hero?

“What a wonderful idea.”
Jude Law, praise for the Wireless Theatre Company

“Being there when [a Wireless Theatre Live radio drama] is being recorded is thrilling!”
Guardian (London)

“The Wireless Theatre Company excels at its art. A true find for all audio enthusiasts!”
Regent (ND) Times

“The judges loved the refreshing nature of these online (radio) dramas…They were impressed with the high production values and creative use of audio and also enjoyed the use of live recordings. Judges also noted the impressive lineup of professionals working with the company.”
Radio Academy, praise for the Wireless Theatre Company