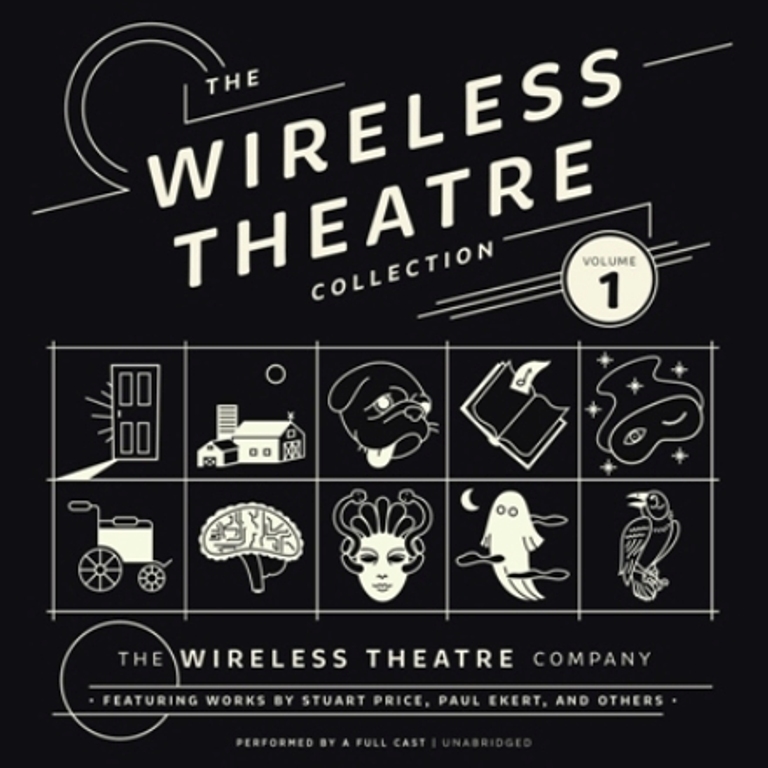 The award-winning and critically acclaimed Wireless Theatre Company strives to keep radio theater alive and well. From the hilarious to the terrifying, this diverse collection features 10 Wireless Theatre productions in a single volume. Their talented team of actors, directors, and writers hail from some of England’s most prestigious theatrical institutions, including the Royal Academy of Dramatic Art, the London Academy of Music and Dramatic Art, the East 15 Acting School, and London’s West End theater district.

SPOOK SQUAD by Jim Spiers, directed by Jack Bowman
In this hilarious British comedy, a mismatched bunch of oddballs and geeks, along with a borderline-psychotic television presenter, venture to a haunted inn in England to record the first-ever episode of Spook Squad—a groundbreaking television show investigating the bizarre, the mysterious, and the supernatural.

2010: SPACE COMMANDER! by Stuart Price, directed by David Beck
Since our bodies cannot genuinely explore space, why not get rid of them? Without wanting to trot out the already tired clichés about social networking sites being our main interaction or point out that, with gaming systems becoming so sophisticated, the next generation will spend an overwhelming amount of time interacting through the Internet, it seems obvious to us that we are already heading for a “body-free” future. At first it seems awful, but when you think about it, it could provide many benefits once we get used to it.

DREAM ON by Paul Ekert, directed by Tom Brazier
Robert is having a dream about his dead ex-wife. The next night, there she is again, hauntingly familiar in the full personification of her monstrous personality. His current wife is unamused by his nocturnal flirtation with the dead past.As dreams and reality begin to overlap, Robert begins a desperate hunt to find out why this is happening. Is he really losing his mind.

THE GRIMM OF STOTTESDEN HALL, written and directed by Stuart Price
Based on the works of Edgar Allen Poe, The Grimm of Stottesden Hall takes listeners on a journey of madness, terror, and gruesome murder!

PHONOPHOBIA by Jack Bowman and Robert Valentine, directed by Tom Brazier
Blighted by phonophobia, a history student takes refuge from the London din in a quiet bookshop off Charing Cross Road. There he makes a chance discovery: an old scrap of paper hidden in a dusty book. On that scrap is a code hiding a lost musical score—the last work of the evil Anton Valderberg Drache! With Halloween approaching, the student races to unlock the mystery, unaware of the supernatural powers he is about to unleash.

MEDUSA ON THE BEACH by Marty Ross
Biddlecombe is a perfectly ordinary English seaside town—except everyone there has been turned to stone. Two seriously out-of-their-depth police officers uncover the strange truth of what happened when middle-aged and romantically disappointed hairdresser Marjorie Briggs finds something in a polythene bag on the beach that didn’t belong there—something ancient and terrible with the power to seriously muck up the lives of Marjorie and all those she loves and hates.

THE YOUTH OF OLD AGE, written and directed by Stuart Price
Wickedly acerbic, The Youth of Old Age shows acclaimed British actor Prunella Scales at her dragon-tongued best. As the story’s matriarch, she’s determined to prevent her heir from marrying “out of sorts.” You’d be mad not to listen to this wicked comedy.

DEVON GIRL by Zalie Burrow, directed by Cherry Cookson
Have you ever wondered what life would be like as a young woman running a farm? Sally Anne Criplett is just that girl.Living with her mole-obsessed, gun-happy, cider-drinking father, Sally has her work cut out. But with the love of local farm boy Johnny Hutchins and their mutual passion for Elvis and farm machinery, life can be full of frolics. Devon Girl is a light-hearted look at farming with a fair sprinkling of colorful locals, such as the adorable best friend Mary, an imposing lesbian vicar, and local irresistible calf dealer Richard Sucksmith.

RADIO HOOHAH, written and directed by Octavia MacKenzie and Ashley McGuire
Today on Radio Hoohah: In My Mind delves into the thoughts of Leonora Velvety Constable-Wheeler and her passion for pugs, Shakespeare, and taking her clothes off when she totally doesn’t realize it.Popular soap opera The Burgers has a few surprises in store when Mrs. White slips on some conditioner in the hairdresser’s. What’s New has an exclusive look into Dorothy Ahlwhala’s latest novel, Raspberry Ripple, Iron Hoof; the latest theater and music releases; and a political hot potato: globalization.

ANGELS IN THE DARK, written and directed by Susan Casanove
Roger Benezoscee is the worst boss you’ve ever had. What could possibly force this obnoxious, egotistical old megalomaniac to change his ways? Nothing short of a Damascene conversion. This innovative mystery stars Kim Durham (Matt Crawford in The Archers). Fans of anagrams may ponder the significance of the character names: Roger Benezoscee, Cath Crobbit, Seth Treave, and Leymar.

“The Wireless Theatre Company excels at its art. A true find for all audio enthusiasts!” – Regent Times

“The judges loved the refreshing nature of these online (radio) dramas…they were impressed with the high production values and creative use of audio and also enjoyed the use of live recordings. Judges also noted the impressive line-up of professionals working with the company….” – The Radio Academy

“To be there when a Wireless Theatre Live radio drama is being recorded is thrilling!”– The Guardian

“This award celebrates the boundless hard work of Mariele Runacre Temple (Founder and Artistic Director) in creating and evolving The Wireless Theatre Company into a cauldron of excellence of new and exciting radio drama” – John Park, Editor, Fringe Report

“Rush, rush, rush to the Wireless Theatre….”– The Stage

“…If you like good theater, if you like powerful acting, and great drama, The Wireless Theatre Company will be your number one… audio drama companies…they simply make fantastic audio that must be heard. Be prepared to be challenged as a listener. If you’re up for the challenge, these plays will transform you!” – 5+/5 Audio Drama Review