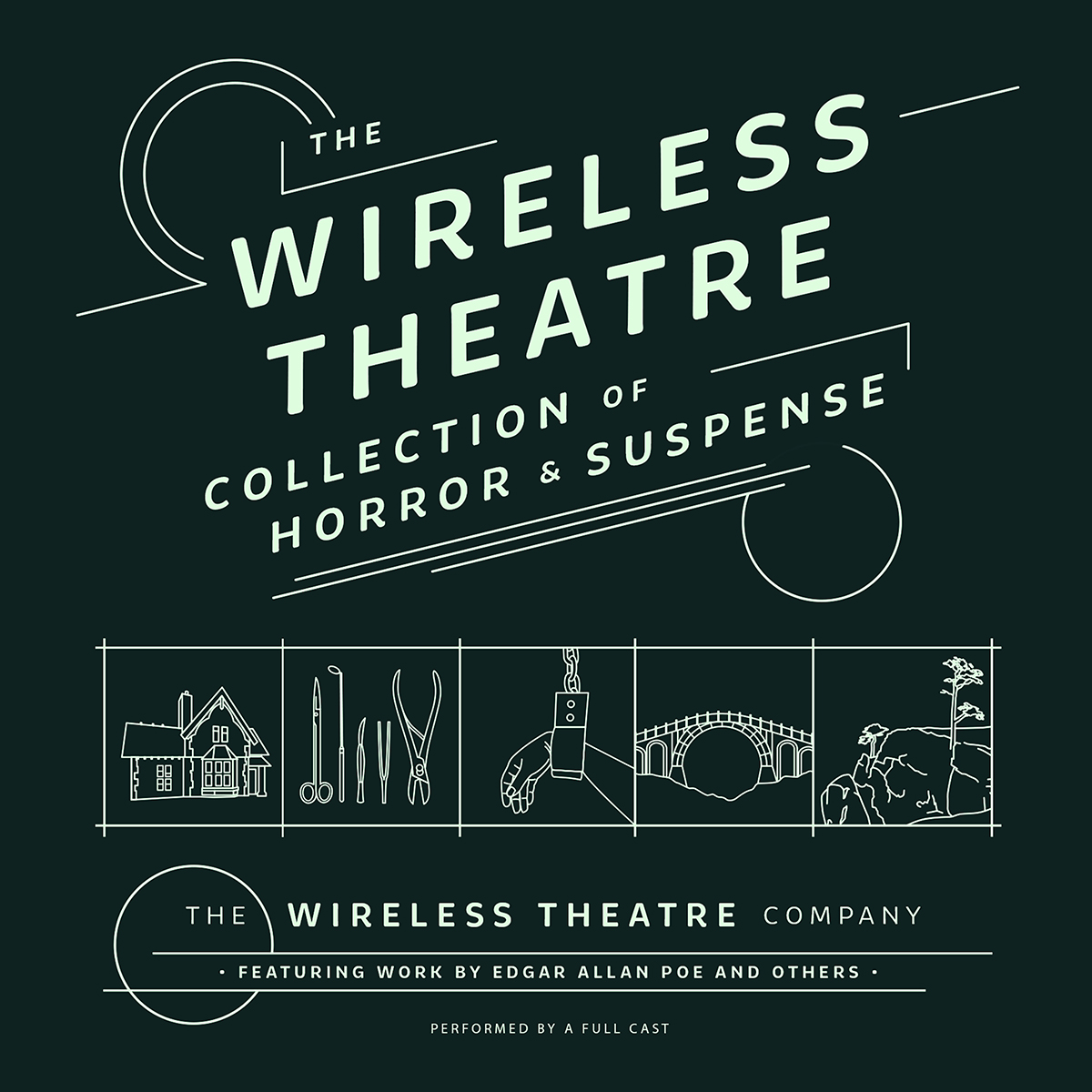 The award-winning and critically acclaimed Wireless Theatre Company strives to keep radio theater alive and well. Collected here are SIX full-cast dramatizations that are sure to send shivers down your spine.

Their talented team of actors, directors, and writers hail from some of England’s most prestigious theatrical institutions, including the Royal Academy of Dramatic Art, the London Academy of Music and Dramatic Art, the East 15 Acting School, and London’s West End theater district.

WINDOVER – By Brita Bradbury
A ghost story set on the wild Atlantic coast of North Devon told through the eyes of Jenny, a girl of nearly nineteen, whose recently deceased grandmother, Mary, has bequeathed her ‘Windover’, the cottage where she is staying with her father and his girlfriend during the summer vacation. Before long Jenny starts to be troubled by visions of two teenage girls, and learns, from a photograph taken in 1934, that these girls are her grandmother, Mary, and her friend Cathy. As the days go by Jenny finds herself drawn into the tragic events that occurred nearly eighty years earlier.

BURKE & HARE – By Terence Newman
This is the story of the infamous 19th Century Scottish Grave-robbers who weren’t Scottish and didn’t rob graves. They were actually Irish and as robbing graves to supply the needs of Edinburgh’s anatomists proved to be rather hard work, they just took to murdering people – usually their neighbours – for profit. In collaboration with their common-law wives, they set about supplying corpses for Dr. John Knox an eminent Scottish surgeon with considerable enthusiasm and gusto. The play follows their business exploits from small beginnings, through their days of peak output to the final reckoning – set against a world that is becoming recognizably modern.

THE CAST OF AMONTILLADO – By Edgar Allan Poe
The Cask of Amontillado is Edgar Allan Poe’s short but enigmatic masterpiece. Set in an unnamed Italian City we hear the story of how Montresor lures Fortunato through the catacombs into the Montreso family vault and there chains him up and bricks him in for eternity. Why he does it we will never know, but he does so with a casual savagery that is truly chilling.

THE WOMAN ON THE BRIDGE – By Marty Ross
Chatsworth House during the Second World War. The Devonshire family makes way for an evacuated girls’ school, the grand interiors converted to dormitories and classrooms. Pupils Ceri and Gwyneth explore these new surroundings and their history, above and below stairs. But a ghost story about a screaming woman on the bridge in the grounds seems disturbingly true – and all the more disturbing for the parallels it presents with the secret love affair they discover their charismatic teacher Miss Cairns is involved in.

CROOKER’S KINGDOM – Part One and Part Two – By Marty Ross
Sir Richard Arkwright has brought modernity to a remote corner of Derbyshire with the creation of Cromford Mill. Now, as his crowning glory, he’s going to build himself a castle – but first a strange outcrop of rocks will have to be removed. Locals warn Arkwright of a local legend about ‘Crooker’, a dangerous nature spirit, but Sir Richard scoffs at such notions until it becomes clear an uncanny force in the landscape is prepared to fight him for ownership of the valley.  Recorded on Halloween night, 2015, at Cromford Mills itself, Wireless Theatre and playwright Marty Ross present another of their unique live radio drama recordings, mingling Cromford’s history with the supernatural chills of an authentic local legend.

“The Wireless Theatre Company excels at its art. A true find for all audio enthusiasts!” – Regent Times

“The judges loved the refreshing nature of these online (radio) dramas…they were impressed with the high production values and creative use of audio and also enjoyed the use of live recordings. Judges also noted the impressive line-up of professionals working with the company….”-The Radio Academy

“To be there when a Wireless Theatre Live radio drama is being recorded is thrilling!”–The Guardian

“This award celebrates the boundless hard work of Mariele Runacre Temple (Founder and Artistic Director) in creating and evolving The Wireless Theatre Company into a cauldron of excellence of new and exciting radio drama” – John Park, Editor, Fringe Report

“…If you like good theater, if you like powerful acting, and great drama, The Wireless Theatre Company will be your number one… audio drama companies…they simply make fantastic audio that must be heard. Be prepared to be challenged as a listener. If you’re up for the challenge, these plays will transform you!” – 5/5 Audio Drama Review